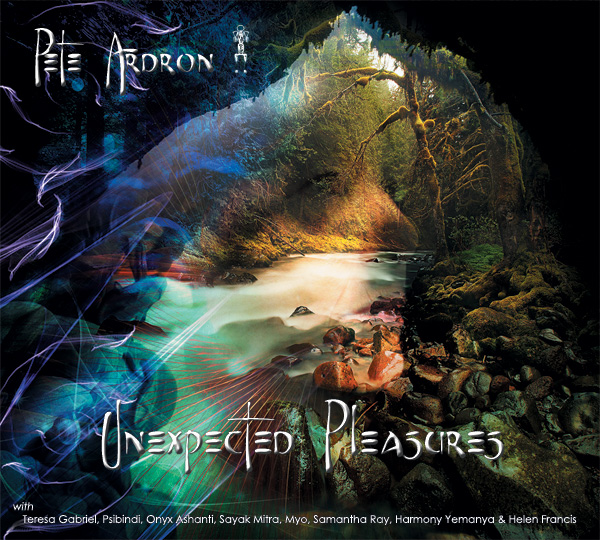 Call it Psybient/Psychill/Psydub/Ethno-chill/World-fusion or whatever, this shows the usual signs of Pete’s main influences - psychedelic, classical (from the turn of the 20th century), and world music, with a strong Indian influence running through much of it.
Musically it carries on very much where Orchid-Star’s Birth left off. Having been persuaded to take the band more uptempo for the 2nd album (Faster), Pete started this album at the same time, finally finishing it a decade later.

It is a chocolate box full of gorgeous and very different guest performances, from the epic Hindi/Urdu torch song Mera Dil (my heart) – almost 9 minutes of stunning, passionate wall–to-wall vocals from Psibindi - to the entrancing, quirky, random incursions of deaf vocalist Helen Francis into the gentle, dubby title track, sharing the vocal credits with the beautiful morning song of a Scottish blackbird.
Orchid-Star vocalists Samantha Ray and Myo also feature along with 2 tracks from radiant Portuguese singer songwriter Teresa Gabriel, flautist Harmony Yemanya, a bewitching, genre-blending collaboration with beatjazz wind-control virtuoso Onyx Ashanti (Soul II Soul/Basement Jaxx) who also appeared on Birth, and a cover (the first Pete has ever done one) of Ami Tar Thikana Rakhini – a big Bengali hit for Manna Dey in the 1960s, with newcomer Sayak Mitra.

"It's not often, that upon hearing a new album, you have that certain and immediate feeling that what you are listening to is already a classic, a game changer, a marker for others to follow..." Ian Taylor (Liquid Lounge)
Click to expand...

"Nothing Unexpected about the excellence to be had here. Unusual and highly recommended." Martin Russell (Afro Celt Sound System)
Click to expand...

"The whole album felt like sitting in your most comfortable chair with the sun streaming in and having the most gorgeous blissed out Sunday afternoon. Stunning production with immaculate vocals." Bruce Elliott-Smith (Grammy award winning writer)
Click to expand...

"This is a fantastic album and one not to be missed by fans of tribal, ethno chillout." Gareth Hovey (Psy-Amb blog)
Click to expand...

"...he continues to produce a unique fusion of world music, ambient, psychedelic, dub and classical sounds. This album will definitely appeal to fans of Orchid-Star and if your unfamiliar perhaps it’s time you enlightened yourself." Woodzee (Martin De La Woods) (Sun is Shining Dub n Chill blog)
Click to expand...

On CD:
Pink Hampster, Amazon, Beatspace,
Psyshop and many more


The title track was released on the Diversity in the Isles Vol 1 compilation, March 2016